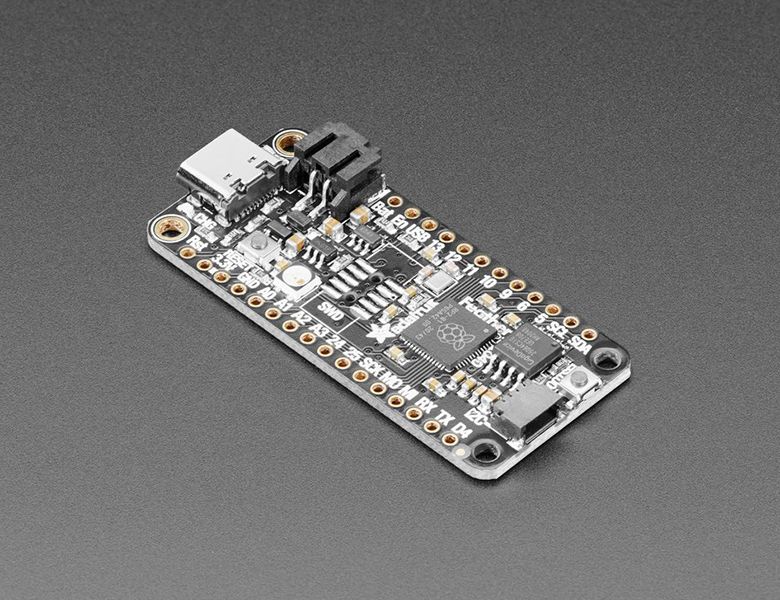 A new chip means a new Feather, and the Raspberry Pi RP2040 is no exception. When we saw this chip we thought “this chip is going to be awesome when we give it the Feather Treatment” and so we did! This Feather features the RP2040, and all niceties you know and love about Feather.

The RP2040 is a powerful chip, which has the clock speed of our M4 (SAMD51), and two cores that are equivalent to our M0 (SAMD1). Since it is an M0 chip, it does not have a floating point unit, or DSP hardware support - so if you’re doing something with heavy floating-point math, it will be done in software and thus not as fast as an M4. For many other computational tasks, you’ll get close-to-M4 speeds!

While the RP2040 has lots of onboard RAM (264 KB), it does not have built-in FLASH memory. Instead, that is provided by the external QSPI flash chip. On this board there is 8 MB, which is shared between the program it’s running and any file storage used by MicroPython or CircuitPython. When using C/C++ you get the whole flash memory, if using Python you will have about 7 MB remaining for code, files, images, fonts, etc.

Comes fully assembled and tested, with the UF2 USB bootloader. We also toss in some header, so you can solder it in and plug it into a solderless breadboard.

This is the latest stable release of CircuitPython that will work with the Feather RP2040.

This is the latest unstable release of CircuitPython that will work with the Feather RP2040.