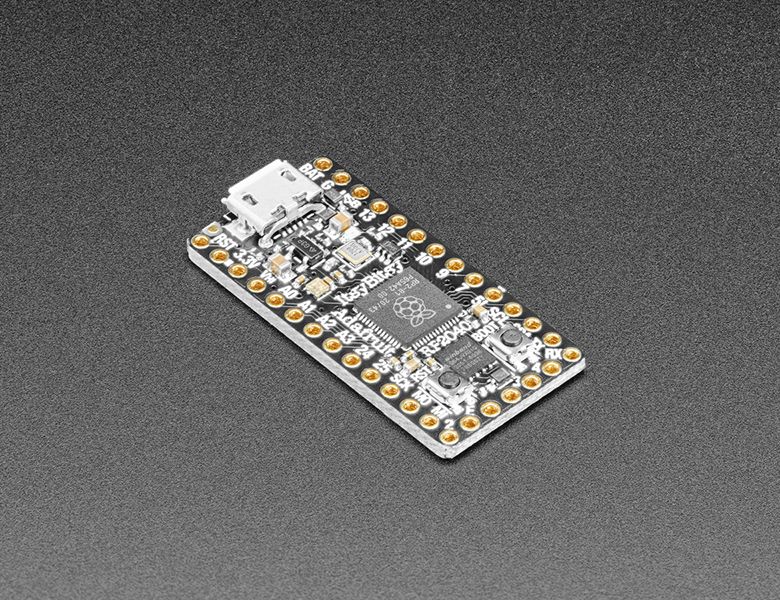 A new chip means a new ItsyBitsy, and the Raspberry Pi RP2040 is no exception. When we saw this chip we thought “this chip is going to be awesome when we give it the ItsyBitsy teensy-weensy Treatment” and so we did! This Itsy’ features the RP2040, and all niceties you know and love about the ItsyBitsy family

What’s smaller than a Feather but larger than a Trinket? It’s an Adafruit ItsyBitsy RP2040 featuring the Raspberry Pi RP2040! Small, powerful, with a ultra fast duel Cortex M0+ processor running at 125 MHz - this microcontroller board is perfect when you want something very compact, with lots of horsepower and a bunch of pins. This Itsy has sports car speed, but SUV roominess with 4 MB of FLASH and 264KB of SRAM.

ItsyBitsy RP2040 is only 1.4” long by 0.7” wide, but has 6 power pins, 23 digital GPIO pins (4 of which can be analog in and 16 x PWM out). It’s the same chip as the Feather RP2040 and Raspberry Pi Pico but really really small. So it’s great once you’ve finished up a prototype, and want to make the project much smaller. It even comes with 4MB of SPI Flash built in, for data logging, file storage, or CircuitPython/MicroPython code

This Itsy comes with loose 0.1” headers you can solder in for breadboard use!

While the RP2040 has lots of onboard RAM (264KB), it does not have built-in FLASH memory. Instead, that is provided by the external QSPI flash chip. On this board there is 2MB, which is shared between the program it’s running and any file storage used by MicroPython or CircuitPython. When using C/C++ you get the whole flash memory, if using Python you will have about 1 MB remaining for code, files, images, fonts, etc.

This is the latest stable release of CircuitPython that will work with the ItsyBitsy RP2040.

This is the latest unstable release of CircuitPython that will work with the ItsyBitsy RP2040.