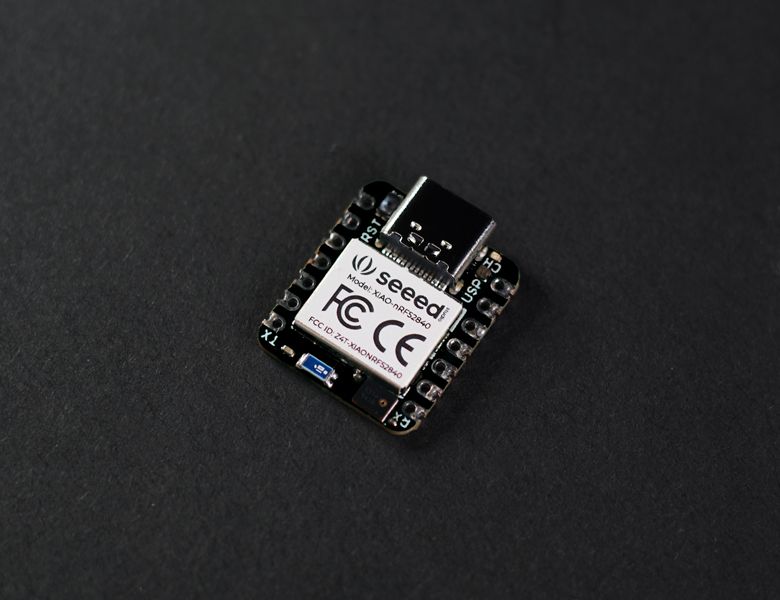 Seeed Studio XIAO nRF52840 (Sense) has equipped a powerful Nordic nRF52840 MCU which is designed in a Bluetooth 5.0 module, built around 32-bit ARM® Cortex™-M4 CPU with Floating-Point Unit(FPU) operating at 64Mhz. With the capabilities of wireless connection, it still remains the Seeed Studio XIAO series classic form-factor of small and exquisite which can be used for wearable devices and Internet of Things projects. Furthermore, it only costs 5 μA in the deep sleep model and it supports battery charge management because of the BQ25101 chip.

In addition, the SENSE version of the board carries two extra onboard sensors. One of them is a digital microphone created through Pulse Density Modulation(PDM) module on the nRF52840 chip. It can receive audio data in real-time which allows it can be used for audio recognition. The board not only receives audio data but also can speak through the MSM261D3526H1CPM microphone. The other one is 6-axis Inertial Measurement Unit(IMU) which can be applied in TinyML projects like gesture recognition. These onboard sensors provide a great convenience for users and the ultra-small size feature of the board has still remained.

The same CircuitPython firmware can be used both for the Seed Studio XIAO nRF52840 with or without additional sensor.

Seeed Studio XIAO nRF52840 (Sense) contains a wealthy interface. The first thing to note is that the Near Field Communication(NFC) is functional on the board. Secondly, there is a tiny and elegant reset button on one side of the Type-C interface. On the other side, it is designed in a three-in-one LED along with a power LED. There are 11 digital i/o that can be used as PWM pins and 6 analog i/o that can be used as ADC pins. It supports UART, IIC, and SPI all three common serial ports. Same as Seeed Studio XIAO RP2040, it has an onboard 2 MB flash which means it can also be programmed by Arduino, MicroPython, CircuitPython, or other program languages.

This is the latest stable release of CircuitPython that will work with the Seeed Studio XIAO nRF52840 (Sense).

This is the latest unstable release of CircuitPython that will work with the Seeed Studio XIAO nRF52840 (Sense).