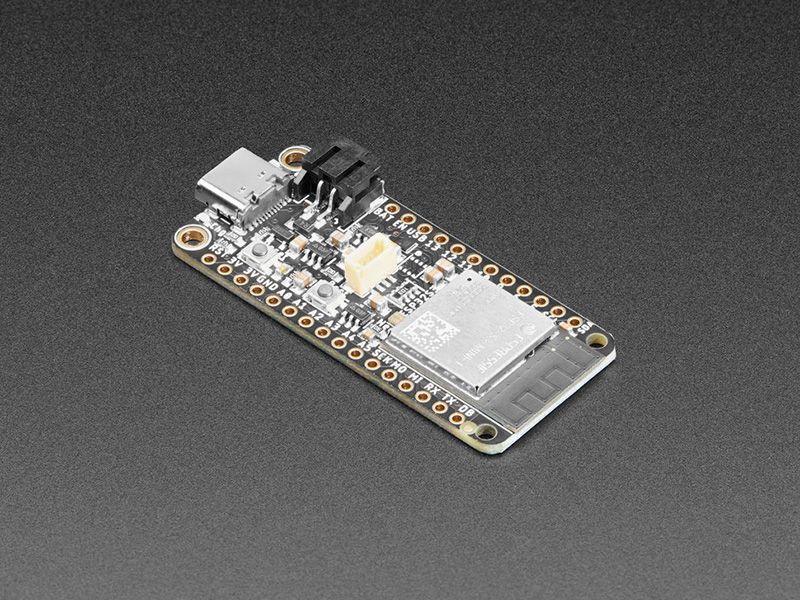 The ESP32-S3 has arrived in Feather format - and what a great way to get started with this powerful new chip from Espressif! With dual 240 MHz cores, WiFi and BLE support, and native USB, this Feather is great for powering your IoT projects.

That’s right - it’s the new Adafruit ESP32-*S3* Feather! With native USB and 8 MB flash, this board will let you upgrade your existing ESP32 projects. Native USB means it can act like a keyboard or a disk drive, and no external USB-to-Serial converter required. WiFi and BLE mean it’s awesome for IoT projects. And Feather means it works with the large community of Feather Wings for expandability.

The ESP32-S3 is a highly-integrated, low-power, 2.4 GHz Wi-Fi/BLE System-on-Chip (SoC) solution that has built-in native USB as well as some other interesting new technologies like Time of Flight distance measurements and AI acceleration. With its state-of-the-art power and RF performance, this SoC is an ideal choice for a wide variety of application scenarios relating to the Internet of Things (IoT), wearable electronics, and smart homes.

The Feather ESP32-S3 has a dual-core 240 MHz chip, so it is comparable to ESP32’s dual-core. However, there is no Bluetooth Classic support, only Bluetooth LE. This chip is a great step up from the earlier ESP32-S2! This ESP32-S3 mini-module we are using on the Feather comes with 8 MB flash and no PSRAM, but it does have 512KB of SRAM so its fine for use with CircuitPython support as long as massive buffers are not needed. It’s also great for use in ESP-IDF or with Arduino support.

This is the latest stable release of CircuitPython that will work with the Feather ESP32-S3 No PSRAM.

This is the latest unstable release of CircuitPython that will work with the Feather ESP32-S3 No PSRAM.