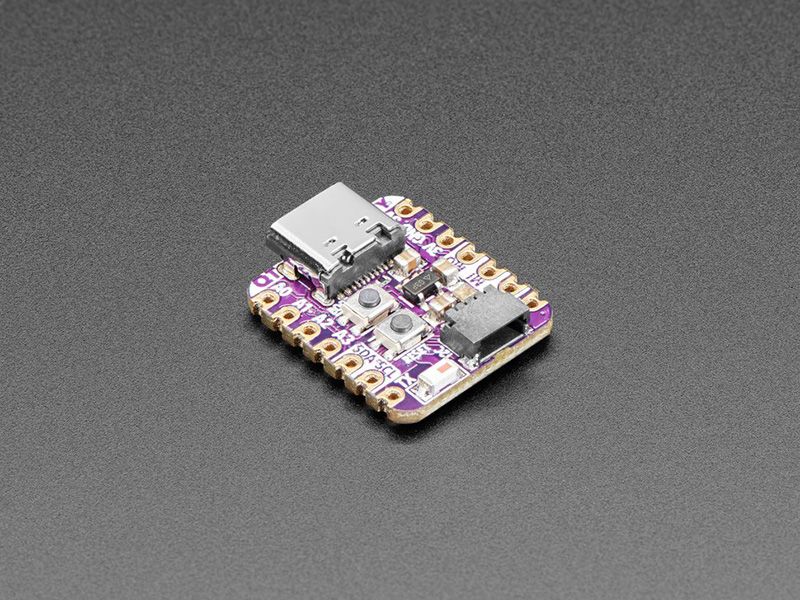 What’s life without a little RISC? This miniature dev board is perfect for small projects: it comes with our favorite connector - the STEMMA QT, a chainable I2C port, WiFi, Bluetooth LE, and plenty of FLASH and RAM memory for many IoT projects. What a cutie pie! Or is it… a QT Py? This diminutive dev board comes with a RISC-V IoT microcontroller, the ESP32-C3!

ESP32-C3 is a low-cost microcontroller from Espressif that supports 2.4 GHz Wi-Fi and Bluetooth® Low Energy (Bluetooth LE). It has built-in USB-to-Serial, but not native USB - it cannot act as a keyboard or disk drive. The chip used here has 4MB of Flash memory, 400 KB of SRAM and can easily handle TLS connections.

There’s a minimum number of pins on this chip, it’s specifically designed to be low cost and for simpler projects than ESP32-Sx or ESP32 classics with their large number of GPIO. Think of it more as an intended replacement to the ESP8266 than to the ESP32!

With its state-of-the-art power and RF performance, this SoC is an ideal choice for a wide variety of application scenarios relating to the Internet of Things (IoT), wearable electronics, and smart homes.

Please note: The C3 uses RISC V as a core, not Tensilica, and has Bluetooth LE (not classic!). The BLE core supports BT version 5 including Mesh

OLEDs! Inertial Measurement Units! Sensors a-plenty. All plug-and-play thanks to the innovative chainable design: SparkFun Qwiic-compatible STEMMA QT connectors for the I2C bus so you don’t even need to solder! Just plug in a compatible cable and attach it to your MCU of choice, and you’re ready to load up some software and measure some light. Seeed Grove I2C boards will also work with this adapter cable.

Runs Arduino with Espressif’s ESP32 core and you can also run MicroPython on this chipset.

This is the latest stable release of CircuitPython that will work with the Adafruit QT Py ESP32-C3.

This is the latest unstable release of CircuitPython that will work with the Adafruit QT Py ESP32-C3.