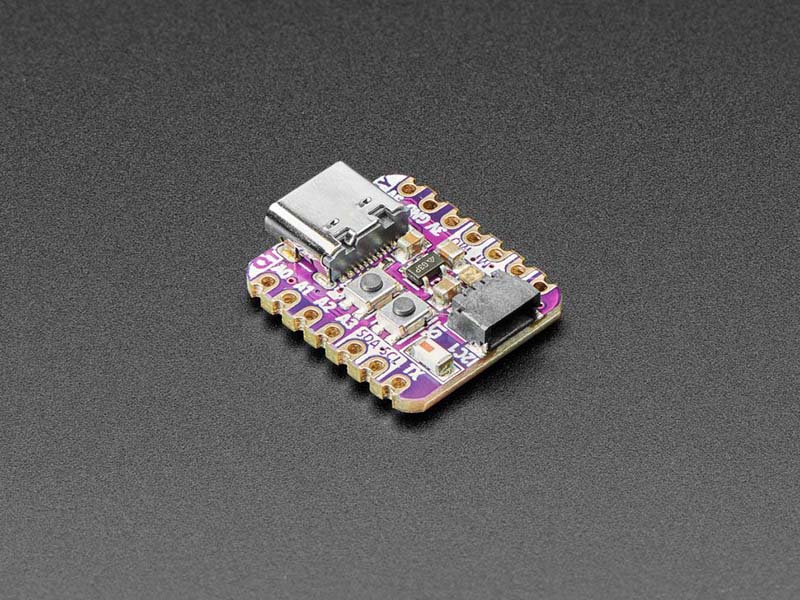 The ESP32-S2 is a highly-integrated, low-power, 2.4 GHz Wi-Fi System-on-Chip (SoC) solution that now has built-in native USB as well as some other interesting new technologies like Time of Flight distance measurements. With its state-of-the-art power and RF performance, this SoC is an ideal choice for a wide variety of application scenarios relating to the Internet of Things (IoT), wearable electronics, and smart homes.

Please note the QT Py ESP32-S2 has a single-core 240 MHz chip, so it won’t be as fast as ESP32’s with dual-core. Also, there is no Bluetooth support. However, we are super excited about the ESP32-S2’s native USB which unlocks a lot of capabilities for advanced interfacing! This ESP32-S2 mini-module we are using on the QT Py comes with 4 MB flash and 2 MB PSRAM so you can buffer massive JSON files for parsing!

OLEDs! Inertial Measurement Units! Sensors a-plenty. All plug-and-play thanks to the innovative chainable design: SparkFun Qwiic-compatible STEMMA QT connectors for the I2C bus so you don’t even need to solder! Just plug in a compatible cable and attach it to your MCU of choice, and you’re ready to load up some software and measure some light. Seeed Grove I2C boards will also work with this adapter cable.

Pinout and shape are Seeed Xiao compatible, with castellated pads so you can solder it flat to a PCB. In addition to the QT connector, we also added an RGB NeoPixel (with controllable power pin to allow for ultra-low-power usage), a reset button (great for restarting your program or entering the bootloader) and a button on GPIO 0 for entering the ROM bootloader or for user input.

Runs Arduino like a dream, and CircuitPython projects are fantastically fun.

This is the latest stable release of CircuitPython that will work with the Adafruit QT Py ESP32-S2 (including uFL version).

This is the latest unstable release of CircuitPython that will work with the Adafruit QT Py ESP32-S2 (including uFL version).