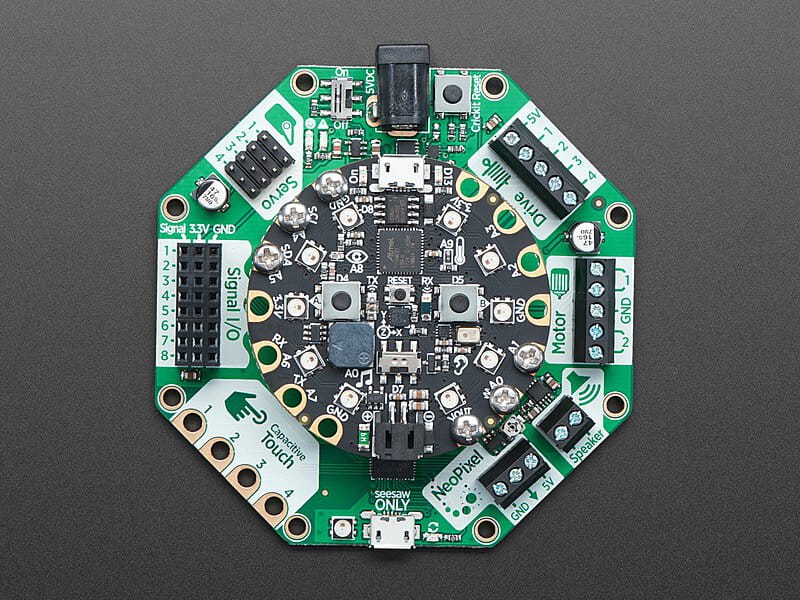 Crickit is a Creative Robotics & Interactive Construction Kit. It’s an add-on for the popular Circuit Playground Express that lets you #MakeRobotFriend using CircuitPython (and more).

Bolt on a Circuit Playground using the included stand-off bolts and start controlling motors, servos, solenoids. With CRICKIT you also get signal pins, capacitive touch sensors, a NeoPixel driver and amplified speaker output. It complements & extends the Circuit Playground so you can still use all the goodies on the CPX, but now you have a robotics playground as well.

The Crickit is powered by seesaw, a I2C-to-whatever bridge firmware. So you only need to use two data pins to control the huge number of inputs and outputs on the Crickit. All those timers, PWMs, sensors are offloaded to the co-processor.

All are powered via 5 V DC, so you can use any 5V-powered servos, DC motors, steppers, solenoids, relays etc. To keep things simple and safe, CRIKIT does not support mixing voltages, use only 5 V - not for use with 9 V or 12 V robotic components.

This is the latest stable release of CircuitPython that will work with the Circuit Playground Express + Crickit.

This is the latest unstable release of CircuitPython that will work with the Circuit Playground Express + Crickit.