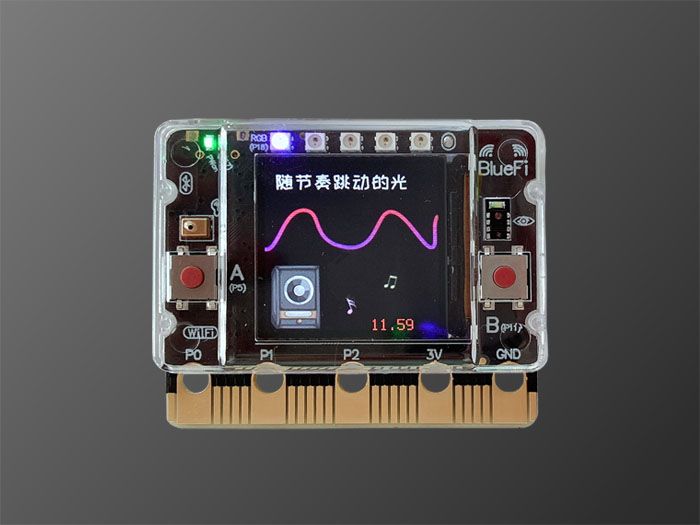 The HiiBot BlueFi have a lot of sensors, vs 6-DoF motion sensor of microbit, including 9-DoF motion sensors, sound sensor, temperature & humidity sensor, and integrated optical sensor. At the same time, BlueFi have two buttons, three touchpads, and 40-Pin extended interface on the microbit.

In a variety of IoT application scenario, BlueTooth and WiFi is an integral part of the wireless connection channel. BlueTooth and WiFi be supportted at the same time on the BlueFI board. You can realize bridges, gateways and other net equipment with BlueFi.

Built-in a lot of sensors and output devices on the HiiBot BlueFi, but a low-cost SBC. Our purpose is to help you quickly realize all kinds of ideas, no trouble wiring and welding electronic components.

The most exciting part of the HiiBot BlueFi is that while you can use it with the Arduino IDE - and it’s bonkers fast when you do, we are shipping it with CircuitPython on board. When you plug it in, it will show up as a very small disk drive with code.py on it. Edit code.py with your favorite text editor to build your project using Python, the most popular programming language. No installs, IDE or compiler needed, so you can use it on any computer, even ChromeBooks or computers you can’t install software on. When you’re done, unplug the BlueFi and your code will go with you.

Easy reprogramming: the HiiBot BlueFi comes pre-loaded with the UF2 bootloader, which looks like a USB storage key. Simply drag firmware on to program, no special tools or drivers needed! It can be used to load up CircuitPython or Arduino IDE.

This is the latest stable release of CircuitPython that will work with the HiiBot BlueFi.

This is the latest unstable release of CircuitPython that will work with the HiiBot BlueFi.