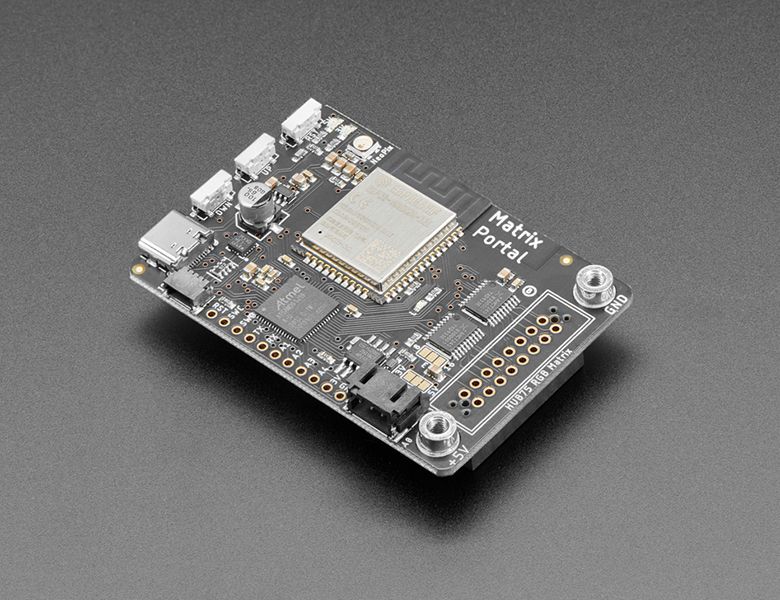 Folks love our wide selection of RGB matrices and accessories, for making custom colorful LED displays… and our RGB Matrix Shields and FeatherWings can be quickly soldered together to make the wiring much easier. But what if we made it even easier than that? Like, no solder, no wiring, just instant plug-and-play? Dream no more - with the Adafruit Matrix Portal add-on for RGB Matrices, there’s never been an easier way to create powerful Internet-connected LED displays.

Plug directly into the back of any HUB-75 compatible display (all the ones we stock will work) from 16x32 up to 64x64! Use the included screws to attach the power cable to the power plugs with a common screwdriver, then power it with any USB C power supply. (For larger projects, power the matrices with a separate 5V power adapter)

Then code up your project in CircuitPython or Arduino, our Protomatter matrix library works great on the SAMD51 chipset, knowing that you’ve got the wiring and level shifting all handled.

The Matrix Portal uses an ATMEL (Microchip) ATSAMD51J19, and an Espressif ESP32 Wi-Fi coprocessor with TLS/SSL support built-in. The M4 and ESP32 are a great couple - and each bring their own strengths to this board. The SAMD51 M4 has native USB so it can show up like a disk drive, act as a MIDI or HID keyboard/mouse, and of course bootload and debug over a serial port. It also has DACs, ADC, PWM, and tons of GPIO, so it can handle the high speed updating of the RGB matrix.

Meanwhile, the ESP32 has secure WiFi capabilities, and plenty of Flash and RAM to buffer sockets. By letting the ESP32 focus on the complex TLS/SSL computation and socket buffering, it frees up the SAMD51 to act as the user interface. You get a great programming experience thanks to the native USB with files available for drag-n-drop, and you don’t have to spend a ton of processor time and memory to do SSL encryption/decryption and certificate management. It’s the best of both worlds!

Comes with one fully-programmed and assembled MatrixPortal, preprogrammed with a rainbow digital sand demo for 32x64 LED matrices.

This is the latest stable release of CircuitPython that will work with the Matrix Portal M4.

This is the latest unstable release of CircuitPython that will work with the Matrix Portal M4.