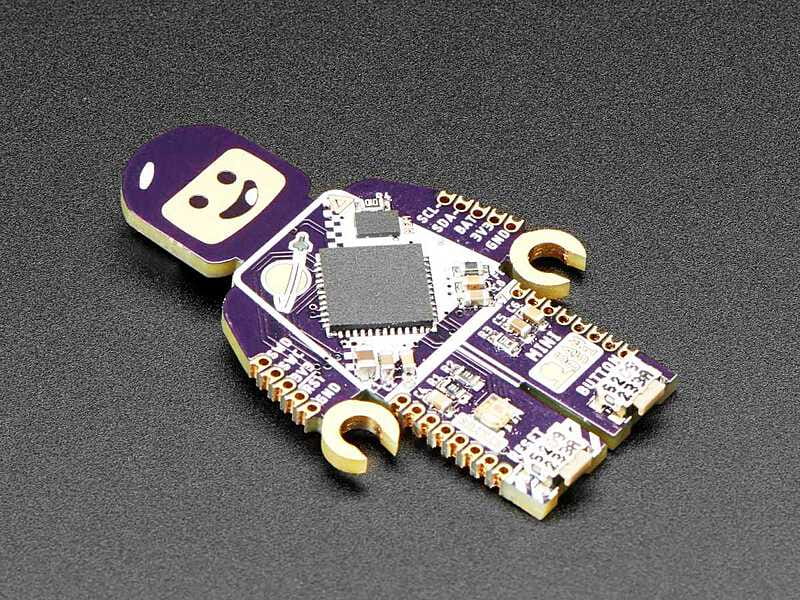 Mini SAM is a LEGO® minifigure-sized development board based on the Microchip SAMD51G 48-Pin 32-Bit ARM® Cortex®-M4F MCU running at 48Mhz.

The boards includes a micro USB interface for programming and power. Around the edges are 0.050″ spaced breakouts for the six analog pins, including true analog out, and several digital pins available on the SAMD51G including some dedicated I2C, SPI, and UART connections.

The Mini SAM boards include two LED indicators; a standard “Built-In” LED and an APA102 RGB LED. The standard LED is red and located on the reverse side of the board. When illuminated it lights up the spaceship on on the logo. There are two built-in buttons as well; a RESET button and a user programmable BUTTON.

In order to support CircuitPython, a 2MB Quad-SPI flash memory chip is included. This provides plenty of space for the CircuitPython program as well as space for user programming. It comes pre-loaded with the latest CircuitPython library bundle.

The boards include a 600mA 3.3V regulator, more than enough to power this little board and its built-in features. The board can be powered from a micro-USB or via a battery connected to the BAT pin – it will automatically switch between the two. There are exposed pads to solder on an optional 2-JST battery connector on the back or directly to the BAT pin.

When in stock, you can purchase a board from minifigboards.com

This is the latest stable release of CircuitPython that will work with the Mini SAM M4.

This is the latest unstable release of CircuitPython that will work with the Mini SAM M4.