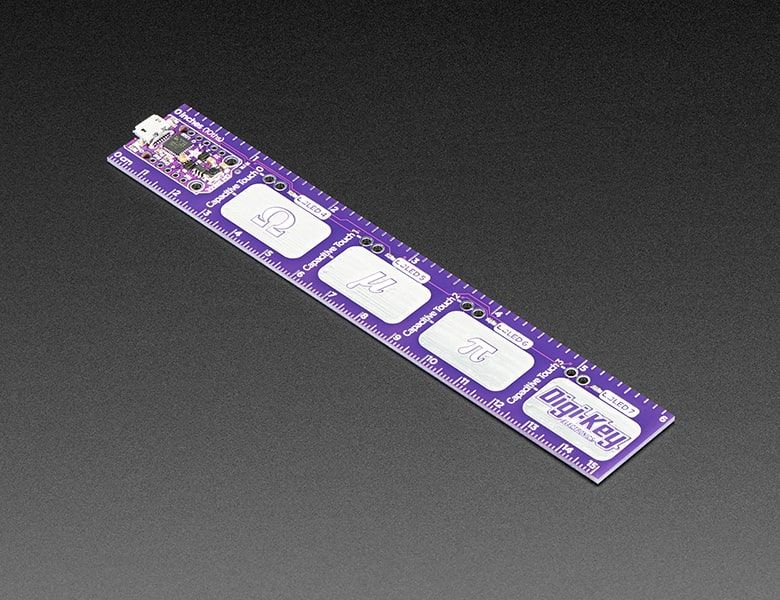 CircuitPython rules! The PyRuler is the first ruler to be able to run CircuitPython. It features an embedded Adafruit Trinket M0, which is a tiny microcontroller board, built around the Atmel ATSAMD21E18 powerhouse.

The first time you soldered up a surface mount component you may have been surprised “these are really small parts!” and there’s dozens of different names too! QFN, TDFN, SOIC, SOP, J-Lead, what do they mean and how can you tell how big they are? On the reverse side of the PyRuler, just like with our PCB ruler, you have a reference board right at your fingertips.

While you can use the PyRuler with the Arduino IDE, it ships with CircuitPython on board. When you plug it in, it will show up as a very small disk drive with code.py on it. Edit code.py with your favorite text editor to build your project using Python, the most popular programming language. No installs, IDE or compiler needed, so you can use it on any computer, even ChromeBooks or computers you can’t install software on. When you’re done, unplug the Trinket M0 and your code will go with you. CircuitPython is easier to code but not as low-level and complete as Arduino.

This is the latest stable release of CircuitPython that will work with the PyRuler.

This is the latest unstable release of CircuitPython that will work with the PyRuler.