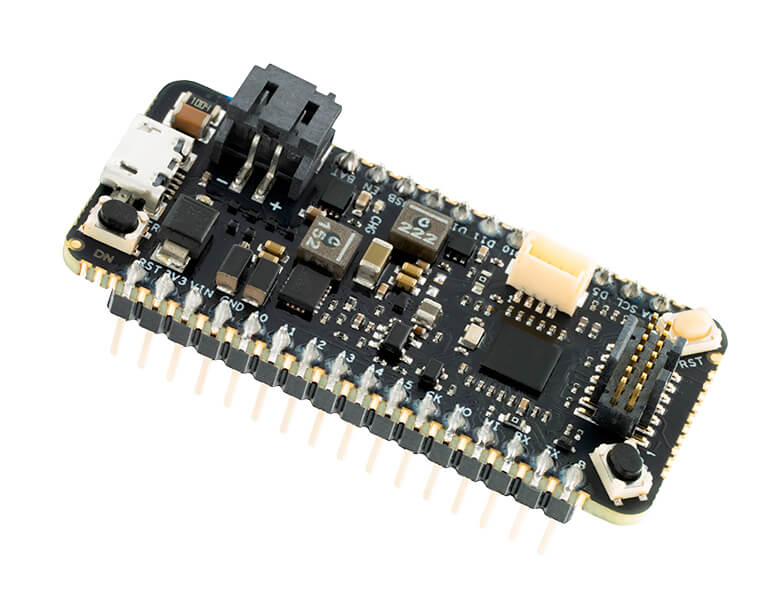 Swan is a low-cost embeddable STM32L4-based microcontroller designed to accelerate the development and deployment of battery-powered solutions. It is especially useful for applications requiring large memory or a high degree of I/O expandability at an affordable cost, such as edge inferencing and remote monitoring.

Uniquely for Feather-compatible boards, Swan is designed to satisfy developers’ needs that span from early prototyping through high-volume deployment. Developers may begin to use Swan in conjunction with Adafruit’s myriad sensors and FeatherWing-compatible carriers. Due to its novel design, for high-volume deployment the low-cost Swan can also be soldered directly to a parent PCB integrating those sensors, utilizing the full range of Swan’s I/O capabilities.

The board has three independent power options – USB, Battery, or Line power – and provides a software-switchable 2 Amp regulator for powering external sensors. When operating in its low-power operating mode, the entire Swan board commonly draws only about 8uA while retaining all of its memory, making it quite suitable for battery-powered devices.

This is the latest stable release of CircuitPython that will work with the Swan R5.

This is the latest unstable release of CircuitPython that will work with the Swan R5.